In 2011 the Engineering and Physical Sciences Research Council set up seven Innovation and Knowledge Centres (IKCs) with the aim of fostering new industries by closing the gap between scientific research and its commercial exploitation. Based in universities and led by expert entrepreneurial teams, IKCs look to innovate in areas as diverse as information security to synthetic biology.

The IKC based at Swansea, SPECIFIC, has a deceptively simple vision for the future of energy. Their ‘Buildings as Power Stations’ concept aims to demonstrate how technology can be integrated into buildings that allow it to generate, store and release enough solar energy to be self-sustaining.

To this end, SPECIFIC have built a number of demonstration buildings, from the humble ‘Pod’, which is now used by parking attendants at Swansea University’s Bay Campus, to the award winning ‘Active Classroom’ based on the same site. Both have generated enough energy to power and heat themselves, which you might think means SPECIFIC has nothing left to prove.

Different building uses have different energy ‘profiles’: a small storage shed doesn’t use as much power as a fully operational school. SPECIFIC are keen to demonstrate the concept works for as many different profiles as possible, and their latest building looks to tackle one of the most energy intensive uses for a building; an office.

The next question was how to make the building a reality. SPECIFIC secured funding for the Active Office from Innovate UK, along with support from Swansea University and the European Regional Development Fund through the Welsh Government, as well as sponsorship for the project from TATA Steel and Cisco.

Architect and Building Manager Joanna Clarke notes there were a number of advantages to using offsite construction for the building: “The speed at which we could deliver the building using offsite methods was key for this project, but quality assurance also played a big factor. Offsite methods give us a more consistency in the build, which is important when we’re measuring its performance.” SPECIFIC were already aware of Wernick Buildings, and from previous discussions felt they would be a good fit for the project. “Wernick were open to doing something new, something that showed the potential of modular,” said Joanna. When they were awarded the funding, their first call was to Wernick.

With the funding awarded, SPECIFIC were still faced with the challenge of undertaking a procurement exercise before the project could begin. Wernick were able to provide an expedited procurement route through their place on the Fusion21 Framework, which facilitated early engagement and collaborative working throughout the programme.

“I think one of the reasons the building project was a success was Wernick’s relationship with their supply chain,” commented Joanna “Having everyone involved earlier meant we could refine a deliverable design from the outset.” Collaboration throughout was vital in ensuring the building stayed on budget. To deliver a two storey building packed with innovative technology, every detail was examined, down to reducing the amount of ductwork needed in the heating system.

Manufacture of the units took 3 weeks, and they were installed over two days. The two storey building is finished externally with low maintenance cladding provided by Tata Steel to match the colours of the neighbouring Active Classroom. One elevation is fitted with photovoltaic thermal tubes, while another features a two storey living wall. The curved roof uses thin film photovoltaic modules bonded onto the steel roofing system. The double glazing used in the main entrance has the performance of triple glazing, reducing heat loss while increasing passive solar gain.

The building is designed for up to 25 occupants, likely to be made up of SPECIFIC staff and hot desks forother members of the research team within the University. This is spread between two small offices on the ground floor and two larger open plan spaces on the first floor. The ground floor also features a breakout area, entrance foyer, and storage, as well as toilets and a shower, both accessible by wheelchair. The interior of the building has a painted finish, with one office using air purifying paint to create a healthy interior environment.  This will be monitored and compared to a space decorated with standard paint, to determine its effectiveness.

It will take a year to establish whether the office has been a success, but the signs are already looking positive; on the day the Active Office was opened, 96kWh were generated between it and the Active Classroom, with 29kWh being stored in the battery system and 47kWh exported to the grid.

“The Active Office is a first, but it isn’t a one-off,” commented Kevin Bygate, Chief Operating Officer of SPECIFIC.  “It is quick to build using existing supply chains, and uses only materials that are already available. This is tomorrow’s office, but it can be built today.”

“There’s no doubt that buildings that generate their own energy are the future of construction,” commented Stuart Wilkie, Managing Director for Wernick Buildings. He continued, “Not only are they better for the environment, but they’re also a fantastic investment,”, before noting the scale of potential savings that could be made with a high quality building using this technology: “We offer buildings with a sixty year design life; not needing to pay to power a building for sixty years could have a terrific financial impact for an organisation.” 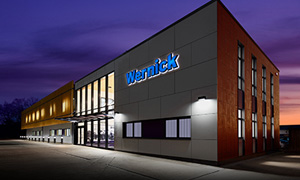 Innovative and award winning framework provider generating cost savings and community outcomes.
Contact Us
Back to top
We use cookies on our website to give you the most relevant experience by remembering your preferences and repeat visits. By clicking “Accept”, you consent to the use of all cookies.
SettingsACCEPTCookie Policy
Manage consent