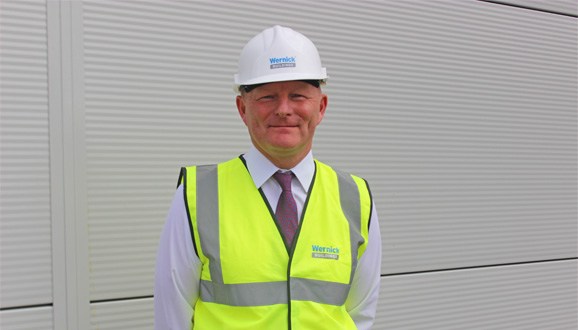 Wernick Buildings Ltd has recently restructured its senior management team and as part of this process Stuart Wilkie has been appointed Managing Director, and a member of the Wernick Group (Holdings) Board of Directors.

Stuart joins the Wernick Group after a distinguished career in the UK Steel industry spanning three decades.  After starting at British Steel in Scotland he moved to Wales in 1991 and there followed a variety of engineering and manufacturing roles before he became Works Manager of the Tin Plate works at Ebbw Vale in 2000.  In 2002 he became Works Manager of the Llanwern Cold Rolling plant before re-joining Tin Plate in Llanelli in 2004.  Following a spell in the Netherlands as Tata’s European Director of Manufacturing, Stuart returned to Wales where his final position was Hub Director of Tata Port Talbot, responsible for over 5,000 employees.  In 2016 when Tata placed its UK business up for sale Stuart led an attempted management buyout but when Tata chose to retain ownership he decided to leave the steel industry to pursue a new challenge.

Group Chief Executive Simon Doran commented; “We are very pleased that Stuart has joined an already very strong senior management team in the Wernick Group.  He brings with him significant experience in leadership, management and manufacturing, intimate knowledge of South Wales, and excellent connections within Industry and Government.  We have exciting expansion plans for Wernick Buildings and I have no doubt that Stuart is the man to deliver on that ambition.”

While Wernick Buildings may not be quite the size of Tata Steel just yet, Stuart is looking forward to the new challenge, and in working for a successful, privately owned business. He told us; “I am delighted to join the Wernick Group, a very successful and growing family owned business with over 80 years heritage, and with the ethos and  values that I share.”