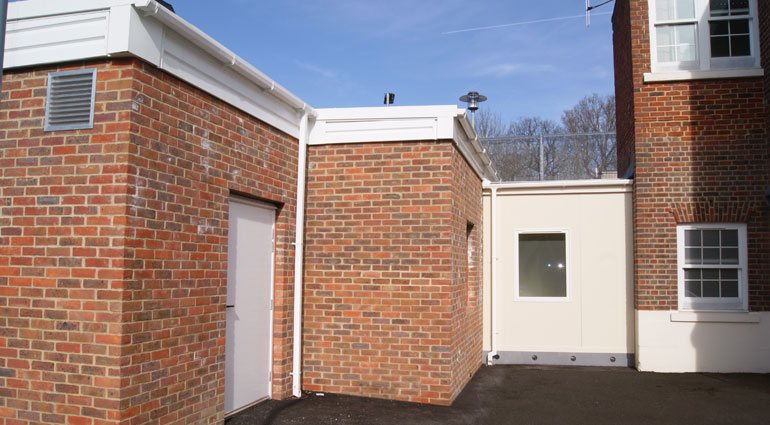 Section 136 of the Mental Health Act 1983 states that if someone in a public place appears to be suffering from a mental disorder, and is in need of immediate care, the police can remove them to a place of safety. Wernick Buildings has provided one such place of safety to the oldest psychiatric hospital in the world.

Founded in the 13th century Bethlem Hospital has since become synonymous with mental health care. Today the hospital is a major centre for specialist care and psychiatric research, and offers a number of national services including the National Psychosis Unit. Due to a restructuring of services, the hospital required replacement place of safety facilities.

The Hospital approached architectural practise Archial NORR to design the building. “We looked at a number of methods of delivering the building,” commented Senior Architectural Technologist Geoff Jennings, “but the speed that a modular solution could offer made it the clear choice.”

The next step was to find someone to deliver the building. Archial NORR presented a number of modular providers to the Hospital, and the one ultimately chosen was Wernick Buildings. Having used their patented PCflex system in the past, Archial NORR knew that Wernick would be able to achieve the level of security that the facility would need. Working with both Archial NORR and the Hospital on the final design, Wernick were able to optimise the design for the client’s needs. The internal finish, in particular, would need a lot of thought.

“We were very keen for it to feel like a therapeutic space,” Sue de Casagrande, Bethlem’s Senior Planning Manager, told us. “We wanted it to be as aesthetically pleasing as possible.” The facility needed to tread a fine line between being secure enough to ensure the safety of staff and occupants, but without the intimidating atmosphere of, for example, a police custody suite.

This led to several changes to initial concept. The vandal proof white resin walls traditionally used in PCflex units was replaced with a colourful quartz resin screed to give a less clinical appearance, and the windows received half clear glazing as opposed to fully obscured. Even the high security doors were given a wood veneer to provide a more comfortable environment for occupants.

The two bedroom building was installed in one day. Followed shortly by a link to the existing building and a brickwork skin, the total program on site was a tight four weeks. The building also features extensive communication and alarm equipment as well as CCTV. The reduced time on site lessened the security risks, and made it easier to ensure that no tools or materials were left unfenced or unattended and that all work was properly monitored.

The feedback from staff has been very positive. “You can’t predict the behaviour or state of mind of people brought in under Section 136,” Sue told us, “but the new facility is robust enough that staff always feel safe working there, and patients also find it a comfortable environment.”